HEC plasma consumables use high quality material and standard process to make sure the highest quality. Our consumables cutting performance is as the same as orginial OEM manufactory.

HEC sell all kinds of plasma consumables include , EASB, Kjellberg, Koike and also supply some torch. 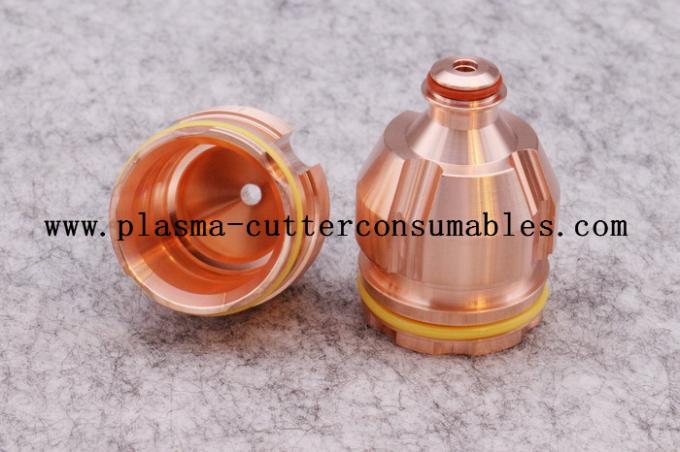 Plasma cutting is a process that cuts through electrically conductive materials by means of an accelerated jet of hot plasma. Typical materials cut by this process include steel, aluminum, brass and copper though other conductive metals may be cut as well. Plasma cutting is often used in fabrication and welding shops, automotive repair and restoration, industrial construction, salvage and scrapping operations. Due to the high speed, precision cuts, combined with low cost of operation, plasma cutting sees a widespread usage from large scale industrial CNC applications down to small hobbyist shops.

The basic plasma cutting process involves creating an electrical channel of ionized gas i.e. plasma from the plasma cutter itself, through the work piece to be cut, thus forming a completed electric circuit back to the plasma cutter via a grounding clamp. This is accomplished by a compressed gas (oxygen, air, inert and others depending on material being cut) which is blown through a focused nozzle at high speed toward the work piece. An electrical arc is then formed within the gas, between an electrode near or integrated into the gas nozzle and the work piece itself. The electrical arc ionizes some of the gas, thereby creating an electrically conductive channel of plasma. As electricity from the cutter torch travels down this plasma it delivers sufficient heat to melt through the work piece. At the same time, much of the high velocity plasma and compressed gas blow the hot molten metal away, thereby separating i.e. cutting through the work piece.

Plasma cutting is an effective means of cutting thin and thick materials alike. Hand-held torches can usually cut up to38mm thick steel plate, and stronger computer-controlled torches can cut steel up to 150 mm thick.[1] Since plasma cutters produce a very hot and very localized "cone" to cut with, they are extremely useful for cutting sheet metal in curved or angled shapes.